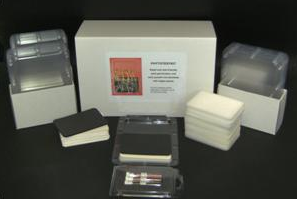 Categoría: Sin categorizar
Each PHYTOTESTKIT for liquid samples contains all the materials necessary to perform one complete test with one monocotyl and two dicotyl plant species, in 3 replicates. The assays are performed in special transparent test containers which allow for direct observations and length measurements by image analysis at the end of the test. Easy to follow instructions and detailed illustrations are provided in the kits for the conduct of the very practical assays. Calibrated high quality seeds of the 3 selected test plants are included in the kits for the germination and early growth tests.

In accordance with conventional phytotoxicity assays the selected plant species encompass monocotyls as well as dicotyls.

The plants selected for the Phytotoxkit microbiotest are: the monocotyl Sorghum saccharatum (Sorgho) and the dicotyls Lepidium sativum (garden cress) and Sinapis alba (mustard).

The 3 former test species are frequently used in phytotoxicity analyses and have been selected for the Phytotoxkit microbiotest because of their very rapid germination and growth of roots and shoots, which allow observations and scoring after only 3 days.

Germination of the seeds and root (and wherever appropriate also shoot) growth of the 3 selected plant species on exposure to contaminated solid substrates or to chemicals, in comparison to germination and growth on a reference soil.

The high quality seeds, the special standard test containers and the standard reference soil are a guarantee for the high repeatability and reproducibility of the assays, in comparison to conventional phytotoxicity assays.

Very rapid set up and scorings which allow handling multiple tests concurrently.
Direct observation of the germinated seeds and automatic measurement of the roots (and shoots) in the unique transparent test containers, by image analysis. A simple and convenient image analysis program can be provided free of charge on demand.
Vertical incubation of the flat test containers in their holders, requiring a minimum of shelf- and incubation space.
“Image capturing” of the germinated seeds in the test containers with any type of “digital” equipment (camera, web camera or flatbed scanner).
Analyses and measurements can be deferred (since the “pictures” of the test plates are stored on computer) which is a major asset in comparison to conventional phytotoxicity tests.
Minimal equipment needed for test performance: small incubator – (webcam) camera or flatbed scanner, computer with image analysis program.

The sensitivity of the Phytotoxkit has been compared with that of conventional phytotoxicity tests based on seed germination and early growth, and was found to give similar results. Additional validation studies are in progress.