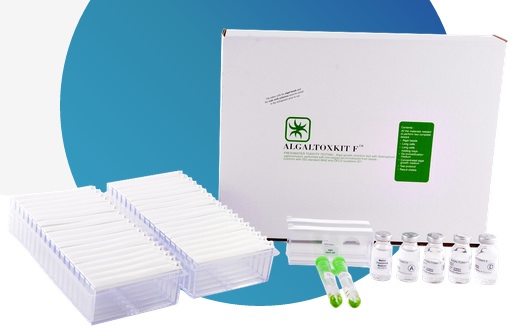 Contents of the Algaltoxkit F

Each ALGALTOXKIT F contains all the materials necessary to perform two growth inhibition tests with the freshwater microalgae Selenastrum capricornutum. Easy to follow instructions and detailed illustrations are provided in the kits for the conduct of range-finding and definitive tests. The test organisms are included in the kits in algal beads from which the microalgae can easily be set free on demand, in less than 30 min, to supply the live biota for the conduct of the assays.

All test materials and equipment included in the Algaltoxkit F are available separately.

User-Friendliness
Bioassays can be started within 30 min. from the “de-immobilization” of the microalgae from the beads. Simple handlings and scorings. Daily scoring of the optical density of the microalgae in the long cells takes less than 15 min. A floppy disc for easy Toxkit data treatment can be obtained on demand.