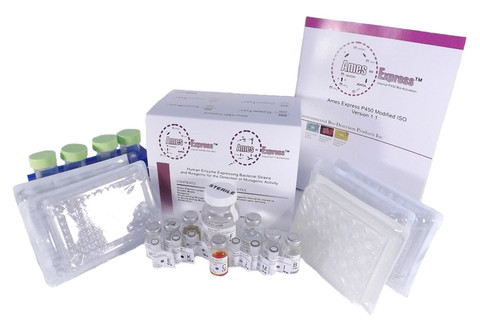 This enzyme performs many oxidative activation reactions on a wide range of polycyclic aromatic hydrocarbons (PAHs) found in combustion processes, cigarette smoke, industrial activity and natural resource development. Although it is capable of performing heteroatom hydroxylation reactions similar to the P450 1A2, hydroxylation and epoxidation reactions on conjugated aromatic systems make up the bulk of activation reactions performed by this enzyme. Metabolism of the pyrene and acridine families of PAHs are common but P450 1A1 is also responsible for activating benzo[a]pyrene B[a]P to its proximate mutagen is the absence of epoxide hydrolase. This means that mutagenic effects from B[a]P are observed using this strain and the sensitivity of detection for low level PAH contamination is substantially increased. Due to its importance for PAH bioactivation, studies involving possible PAH contamination of air water or soil samples should include this bacterial strain to provide sensitive and selective detection of mutagenic effects from PAHs.

Click here to learn more the role of the  Ames ExpressTM Strains for educational use.

Another advantage with the recombinant P450 1A1 and NADPH-P450 reductase expression system is that the reactive metabolites will be generated inside the cell rather than outside the cell, as is seen with the S9 rat liver mix.  As a result, this mode of bioactivation will allow short half-life reactive mutagens enough time to reach DNA sites allowing for an increase in sensitivity to mutagenesis.

The recombinant P450 protein also serves as a cost effective and animal friendly alternative to the S9 rat liver extract mix which is the current bioactivation standard.

This system acts as an in vitro mimic involving the uptake and breakdown of xenobiotic compounds by a mammal and its liver enzymes, resulting in the generation of mutagenic products inside the living system. The recombinant P450 1A1 protein also serves as a cost effective and animal friendly alternative to the S9 rat liver extract mix which is the current bio-activation standard . Like EBPI`s GST expressing strains, the recombinant P450 1A1 reductase expression system is that the reactive metabolites will be generated inside the cell rather than outside the cell.  As a result, this mode of bioactivation will allow short half-life reactive mutagens enough time to reach DNA sites allowing for an increase in sensitivity to mutagenesis.

P450 1A1 is a Phase 1 enzyme found primarily in the hepatic tissue and is responsible for metabolizing polyaromatic hydrocarbons (PAHs), aromatic amines and nitro aromatics. It performs a variety of chemical reactions on several different xenobiotic classes and is a key contributor to the mechanistic mutagenicity of well known carcinogens like benzo(a)pyrene (B[a]P), PhIP and 4-aminobiphenyl.